Matilda Rausch Dodge Wilson, visionary founder of music hall, was born in Walkerton, Ontario in 1883, moving with her family to Detroit at the age of 1. In 1902 she graduated from the Gorsline Business College and went to work for the Dodge brothers, John and Horace, at their Hamtramck firm.

The curved wood paneled walls, silk drapes, specially designed seats and carpet, and multi-tiered lobby were opulent for the time and remain so.

The professional relationship between John and Matilda developed into a personal one and in 1907, they married. In 1920, while in New York City on business, John contracted influenza and died. his brother Horace would die less than twelve months later, leaving the widows in charge of the firm. They sold it in 1925, becoming two of the wealthiest women in the country. That same year, Mrs. Dodge re-married Alfred G. Wilson, a lumber broker from Wisconsin.

With architect William Kapp in tow, they toured Europe and the great theaters of the day, intent on learning all they needed to know to create a state-of-the-art house here in Detroit. Mrs. Wilson chose to build a ‘legitimate’ theater -- a theater designed for live stage and theatrical presentations. It was the age of the talkies and everyone believed that the movie industry would edge theatrical presentations out of the market, but she knew better.

The Wilson Theater opened on December 9, 1928 with a production of Florenz Ziegfeld’s “Rosalie.” Matilda’s vision went beyond these four walls, as her original mission specified welcoming men and women of all ethnicities to the theater’s audience and its stages. Her enduring example of inclusion and opportunity remain central to our work today.

Mr. Kapp and his team from Smith, Hinchman & Grylls designed the 1701-seat theater to be built at a cost of $3 million, with luxurious, beautiful, state-of-the-art attributes. The curved wood paneled walls, silk drapes, specially designed seats and carpet, and multi-tiered lobby were opulent for the time and remain so. Dressing rooms to accommodate 100 performers and an orchestra pit for 40 musicians made the Wilson Theater the rival of any major performance facility in the country. Many of the original architectural elements remain today, including the Wilson Theater logo expressed in iron work on the opera boxes and the jazz café terrace. The building is simply one of the finest examples of art deco architecture in Detroit.

Michigan Opera Theater was launched at the Music Hall in 1971 and remained in residence until 1985. The building dodged the wrecking ball in 1974, thanks to the intervention of Detroit renaissance, the Kresge Foundation and the board of trustees. A comprehensive renovation in 1995 restored each and every detail to its original glory, and the building is listed on the national register of historic places.

Fred Astaire and Mikhail Baryshnikov have left footprints on our boards. The voices of Etta James, Nina Simone, and Billie Holiday have reached into the rafters, and Ray Charles declared us one of his all-time favorite houses to play! The list is extraordinary and growing.

In 2006, new president and artistic director Vince Paul added a second venue in a former cloak room – the cozy, 85-seat Jazz Café. It was re-christened Aretha’s Jazz Café in the fall of 2018, in response to the Queen of Soul’s wish for a downtown venue that would carry on her legacy. Their glorious vintage neon tower sign was restored in 2007, and 2014 saw the addition of a third venue. The rooftop 3Fifty Terrace is downtown’s wildly popular summer music spot, seven stories up and nestled among downtown’s stunning architecture.

Today, Music Hall stands as one of  Detroit's premier venue for jazz, theater, and dance. Their mission continues through the generosity of their Trustees, Producers, Corporate Sponsors, Foundations, and Patrons. 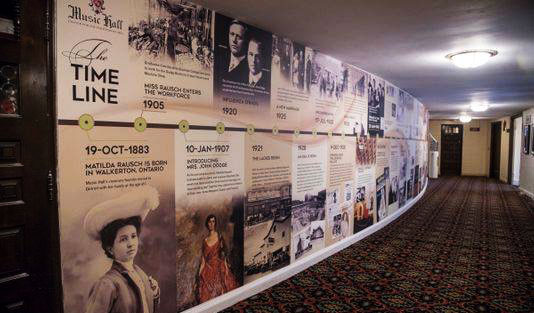 Come celebrate 90 years of Music Hall in Detroit with their new Archive Exhibition on the 5th floor. Featuring nine decades of performers, events, shows, artifacts and more, this FREE to the public archive will take you through the impressive history of Music Hall. Open Monday through Friday from 10:00am-6:00pm (as well as during shows,) be sure to set aside time for this one of a kind Detroit experience.

Also in This Section:

Sign up to receive the latest information on all Broadway in Detroit Shows.
Receive exclusive offers and pre-sales before the general public.

Your personal information will never be shared, rented, sold or otherwise released to any third party. For more, see our Privacy Policy.